And now, in coloring-book form, a man who needs no introduction, at least for those who have been following Trump-Russia, or own a television.  James Comey's book tour, in support of his memoir A Higher Loyalty: Truth, Lies, and Leadership, released April 17, 2018, put him back in the national spotlight.  But he has hardly been out of it since July 5, 2016, when he released the now-infamous statement about the investigation of Hillary Clinton's use of a private email server. 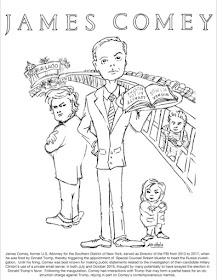 That statement, which launched a thousand "but her emails" memes, made Comey a Democratic bogeyman.  Regarded as far more damaging was his follow-up letter to Congress on October 28, 2016, just ten days before the election, that the investigation had been re-opened.  This turned out to be related to the investigation of Anthony Weiner, notorious New York "sexter" and estranged husband of longtime Clinton aide Huma Abedin.  In the end, as Comey reported November 6, there was no "there there" - but the damage had been done: as Nate Silver put it in May 2017, "The Comey Letter Probably Cost Clinton the Election."

But once Trump was elected, things got more complicated.  Comey's contemporaneous notes and memos detail Trump's January 2017 request for his "loyalty," and February 2017 pressure relating to the investigation of former (and shortest-ever-serving) National Security Advisor, convicted felon, "Lock her up!" cheerleader, "pizzagate" conspiracy theorist, and all-around "good guy" (according to Trump) Mike Flynn.

In March, 2017, Comey confirmed that the FBI had been investigating the Trump campaign in relation to Russian contacts - the set of issues that became "Trump-Russia" - as far back as July 2016.  Yes, July 2016.  In what can most charitably be described in hindsight as crashingly bad judgment, at the same time Comey saw fit to announce to the national media that an investigation of candidate Clinton was going on, there was at the same time an unannounced investigation of candidate Trump.

On May 9, 2017, Trump fired Comey - or more precisely, before Presidential factotum Keith Schiller could deliver the termination letter, the announcement of Comey's firing was released to the media, so Comey learned of his dismissal from announcements playing on television while Comey spoke to FBI agents in Los Angeles.  On May 11, Trump confessed to NBC's Lester Holt that he had done so because of "this Russia thing." This all began the cascading series of events that led to the appointment of Special Counsel Robert Mueller (also a former director of the FBI, as it happens) - and to Trump's relentless characterization of Comey as a "LEAKER" and a "LIAR."  Neither of which can be substantiated, of course: the memos Comey shared with Columbia professor Dan Richman were not classified (and hence not "leaked"), and as for "lying," well, the instantly-viral meme on that subject was "Lordy, I hope there are tapes."  In his book-tour appearances, from Rachel Maddow, where he slumped tielessly in a lavender shirt, to Stephen Colbert's Late Show (black shirt (!), no tie), Comey reinforced his reputation for an earnest if somewhat priggish demeanor, an unbecoming unwillingness to admit error - but also a fundamental truthfulness.  Does anyone but a "Deep State" conspiracy theorist really doubt that events transpired pretty much as Comey relates?

If, as is hoped for by many and suspected by more, the Mueller investigation ultimately leads to Trump's impeachment or resignation, James Comey may in the end be known not just as the guy who got the Gambino family, or who stood his ground against a Bush administration wiretapping program as AG John Ashcroft lay incapacitated in a hospital bed - but as the man who brought down two Presidents.