The man The New Yorker just last month aptly called "the fixer di tutti fixers," Rudy Giuliani, now looks more like the ranting Mr. Smallweed of Charles Dickens' Bleak House, the "baleful old malignant who would be wicked if he could," waiting for someone to shake him up and return both his neck, and his sanity, to public view.  But this is no recent transformation.  A closer look shows that Giuliani in his prime was every bit as great a threat to democracy and the American rule of law as his capo Donald Trump.  Giuliani is, after all, the man who long ago said,

(Except, it now appears, when it comes to Trump and a subpoena from Mueller.) 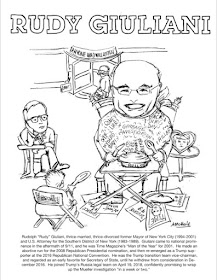 Shortly after Trump's election, when Giuliani's star appeard to be in the ascendancy, he was initially thought to be in serious consideration for a Cabinet post - Attorney General or Secretary of State.  Principled journalists took the time to remind non-New Yorkers of the anti-Dinkins cop riot that Rudy rode into office, never distancing himself from its open and despicable racism, and to document his long history of authoritarianism and vindictiveness.  By December 2016, he'd withdrawn.  But these qualities align him perfectly with Trump, of course, so his reappearance is in that sense no surprise.

Giuliani himself made an abortive run for the Republican Party's Presidential nomination in 2008, hoping to ride a wave of his "America's Mayor" popularity into the White House.  His Presidential dreams came a-cropper, ironically, because the big-city New York mayor was just too liberal (as Mitt Romney didn't hesitate to remind Republicans).  But whatever Rudy learned about federal campaign finance law back then, he seems promptly to have forgotten, in his current desperate bid to suggest Trump's failure to report Cohen's $130,000 loan or gift (even Kellyanne Conway's husband George knows it matters not) was not an FECA violation because no "campaign funds" were used.  (I discuss this issue in more detail here.)  Or for any one of the ever-changing panoply of reasons offered as he figures out the facts - a task so complicated Giuliani had to resign from Greenberg Traurig on May 10, 2018, to devote all his mental faculties to it.

Back in 2000, Jimmy Breslin called Rudy Giuliani "a small man in search of a balcony."  Fox News seems happy to provide him with one (as do other major media outlets).  Perhaps he will totter right off of it.

(Art by Andrea McHale, a special-education teacher in New York City; lettering by Alex Mannos, a graphic artist in Sacramento, California.  The coloring page is subject to a Creative Commons license as below.)