Less than ten miles from my home near Emory University in Atlanta is Georgia's most popular public attraction. Every year approximately 4,000,000 people drive through Stone Mountain Park to visit one of its many exhibits. To get from the entrance of the park to the popular hiking trail at the bottom of the mountain, visitors go down Jefferson Davis Drive and then pass Stonewall Jackson Drive and Robert E. Lee Boulevard. At the bottom of the trail leading up to the mountain is an American flag and four Confederate flags for all to see. Here is a picture: 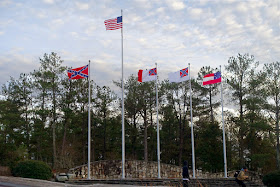 In addition, at the center of the park is, of course, the largest confederate symbol in the country: a nine story etched carving of Jefferson Davis, Stonewall Jackson, and Robert E. Lee. Here is a picture that does not do justice to the size of the etched carving. 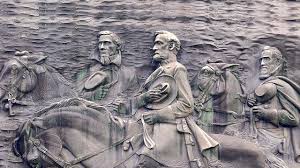 The flags and the huge carving do not represent anything other than naked racism. Work started on the park in 1915, but it wasn't accessible to the public until 1965 when it opened on the 100th anniversary of, wait for it, President Abraham Lincoln's assassination. As the park was being conceived, an Atlanta newspaper reporter wrote, “Just now, while the loyal devotion of this great people of the South is considering a general and enduring monument to the great cause ‘fought without shame and lost without dishonor,’ it seems to me that nature and Providence have set the immortal shrine right at our doors."

The origins of Stone Mountain Park, as well as its opening in 1965, are nothing more nor less than a shrine to a time when white people owned black people and the South fought a war to keep things that way. Stone Mountain has been an embarrassment for a long time, but in the age of Trump (he's gone from office but we are still in his era tragically), something simply must be done. The Confederate flag is now as much as ever an open symbol of racial oppression and hatred. There is no way to make this palatable to people who understand we are still fighting institutional racism in every segment of our society. As Stacey Abrams once said in a tweet, "paid for by founders of the 2nd KKK, the monument had no purpose other than celebration of racism, terror & division when carved in 1915." Nothing has happened since 1915 suggesting the odes to Confederate generals and their flags have any meanings other than the pernicious ones that motivated the monument's creation.

There are of course groups in Georgia trying hard to change this situation both as to the flags (easily removable) and the etching (not easily removable), but, alas, there is a Georgia law that prevents the removal of  any “plaque, statue, marker, flag, structure name, display or memorial constructed and located with the intent of being permanently displayed and perpetually maintained.” People who want to see the flags go argue that they were not intended to be "permanently displayed" and "perpetually maintained," but the CEO of the Stone Mountain Memorial Association says he is bound by the law when it comes to the flags (and obviously the huge monument). There are certainly arguments against that conclusion when it comes to the flags but nevertheless a Georgia legislator plans on sponsoring a bill to repeal the monument law.

The flags and the huge carving raise quite different issues. It would be an hour of work to remove the flags and then put them in some museum somewhere where children and adults could read about the infamous history of the Civil War, and why these testimonials came around as signs of rebellion against racial progress and dismantling Jim Crow. What would be the arguments in favor of keeping the flags?

Black people see them, correctly, as symbols of racism, hatred, and oppression, so the argument would be, let's stay racist? Let's remind people of why the South fought the Civil War? Let's jump for joy over those wonderful times when Georgia had separate public facilities (not just schools but parks, prisons, pools, phone booths, etc) for whites and blacks? The questions answer themselves. Now that Georgia turned blue in the 2020 Presidential and Senate elections, the removal of these flags should be a high priority for Georgia politicians. They should make GOP legislators explain why they want to keep such horrible symbols waving under the blue Georgia sky.

The huge carving, of course, is a different matter. We can't just remove it and put it in some museum. Plus, despite its depiction of evil, it is an impressive work of art. But we can add to the monument in some way that tells those looking at it the evil origins of the etching. A huge plaque could be created with large lettering that could in a sentence or two explain that this symbol of Georgia's past is a reminder of the formal, state sponsored racism that defined our state for so long. I am sure others have different creative solutions but leaving it alone should not be an option.

The memorial to Davis, Jackson, and Lee, as well as the Confederate flags flying at the base of the mountain, are symbols of racism that have no place in 1970, much less 2021. Anything less than the removal of the flags and some plan to dilute the KKK-inspired message of the park's center piece is simply unacceptable. None of our children, nor their children, white and black, brown and yellow, should be gazing at state-maintained symbols that glorify slavery, the Confederacy, and segregation. It is well past time for Georgia officials to turn Stone Mountain from a leading symbol of racism to a monument to progress. And if we can't get that done, maybe we haven't made too much progress after all.