No Method to the Madness

In recent days, President-elect Trump has seemed to walk back his dismissal of the intelligence community's confident assessment that Russia was behind the hacking of Democratic email accounts and their release via WikiLeaks. As with all things Trump, the walking back could be reversed at any moment and comes with only deflection, nothing resembling an apology. Here, in two tweets, we learn that it was not Trump who credited Julian Assange over U.S. intelligence officials but merely the "dishonest media" that misattributed this sentiment to him and that Trump is a "big fan" of "Intelligence." 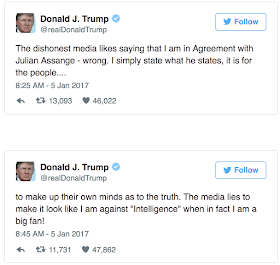 Whether Trump remains a big fan of "Intelligence" after he has his first encounter with some actual intelligence remains to be seen. Today, Trump is scheduled to receive the briefing that President Obama received yesterday. Presumably that will include classified information that was not in the public hearing conducted by the Senate Armed Services Committee yesterday. It's possible that when the evidence is laid before him, Trump will conclude that it was Russian hackers after all.

But don't count on it.

Another possibility is that Trump--who is in many respects the embodiment of the Dunning-Kruger effect--simply won't understand what he is told and so will continue to think that China or a 400 pound guy in bed was behind the hacking. (Note to self: For future column, ask why the standard catalogue of groups of people Trump insulted during the campaign--Mexicans, Muslims, women, etc.--does not include people who weigh more than they would like. But I digress.)

It's also possible that Trump will get the briefing, will be persuaded that yes indeed there is overwhelming evidence of Russian hacking, and then simply lie about what he heard. The tweet pretty much writes itself: Good briefing on hacking. No clear intel who it was. Must rebuild intel after Obama and Dems ruined it. MAGA.

To be sure, there is yet another possibility. Maybe Trump has inadvertently stumbled onto something. U.S. intelligence is hardly perfect. Trump is right that the WMD assessment leading up to the 2003 Iraq War was a terrible failure--although much of the blame for that must be laid at the feet of the Bush Administration for pushing the intelligence professionals for a particular answer. Still, the fact that Trump says something isn't, by itself, a sufficient reason to conclude that the thing he says is wrong. At this point, we in the public have only the assurance from the intelligence agencies that they are confident the Russians were behind the hacking. Maybe the declassified report to be released next week will be so damning that reasonable people will have no choice but to accept its findings, but until that happens, as this skeptical Rolling Stone article notes, we have only a "trust us."

In light of the bipartisan consensus among people who have seen more than I have, I'm inclined to think that Trump's skepticism is unwarranted. Or at least I'll assume that for the balance of what I say here. So what is he up to? Why does Trump want to begin his presidency at odds with the intelligence professionals?

I continue to think that the best answer is one that I floated a couple of weeks ago, when I asked why Trump doesn't just condemn Russian hacking. I wrote then:  Trump's opposition to an investigation is not based on any sort of rational calculation. It is simply the product of his huge-but-fragile ego. Anything that is in any way connected with the possibility that he didn't win a ginormous unpresidented victory without any help from anybody must be met with the overwhelming force of Trump's blustering denials and fabrications.

I'll end on a dire note. Even though I think Trump is not making any sort of rational calculation, in a sense, his acting out is harmless to him and maybe even beneficial. The intelligence officials whom Trump has insulted will most likely put professionalism above ego and give him the same information they would give any president. But even if not--if Trump's criticisms of the intelligence community end up driving a wedge between him and them--the result could "benefit" Trump. A terrorist attack that goes uninterrupted because the president does not have the full cooperation of the intelligence services is just the sort of tragedy that could create a rally-'round-the-president effect. At that point we could expect Trump to revive some of his more outrageous proposals--the Muslim ban, torture, etc.--and we would likely see increased public support for these plans.
Michael C. Dorf at 7:00 AM
Share
‹
›
Home
View web version