With COVID-19 cases and deaths in the United States setting daily records, this seems like an appropriate time to check in on NYU Law Professor and libertarian public intellectual Richard Epstein. Recall that back in March, Epstein wrote a column for the Hoover Institution website condemning what he thought was shaping up to be a governmental overreaction to the pandemic. In that column, Epstein predicted that even without substantial government interventions, the total number of COVID-19 deaths in the United States would be around 500. Shortly thereafter, Epstein acknowledged what he called a "stupid gaffe." He should have said 5,000 U.S. deaths and 50,000 deaths worldwide. The original column was thus corrected (at least twice).

We know from Bob Woodward that as early as February, Donald Trump chose to downplay the COVID-19 risk. But we also know that Trump is mercurial and thus might have been led by advisors to take more aggressive steps if they had persuaded him that controlling the pandemic would actually boost the economy over a several-month period and thus benefit him politically. That didn't happen, however, in part because, as the Washington Post reported, "[c]onservatives close to Trump and numerous administration officials [were] circulating" Epstein's article playing "down the extent of the spread and the threat."

Epstein cannot be blamed for all of the deaths and long-term illnesses that the U.S. has experienced in the last eight months. Even countries like Germany that took more aggressive measures in the spring were hit by a second wave this fall. However, Germany has experienced a per capita death rate of less than a fifth of the rate in the U.S. And some other developed countries--like Taiwan, South Korea, and Japan--have done even better. The Trump administration's insufficiently aggressive policies and Trump's active undermining of state and local public health measures are surely responsible for countless thousands of excess death and suffering in the U.S. One would think, therefore, that Epstein would regret whatever role his erroneous analysis played in contributing to all that death and suffering.

Yet so far as I have been able to determine, Epstein has made no public expression of remorse, despite continuing to maintain a public profile. Perusing Epstein's written and audio output over the last several months, one finds him stating views on all manner of questions. He can be seen denying that institutional racism is a problem in the U.S., pronouncing Trump the better choice than Biden, and then, following the election, lamenting the incoming Biden administration's plans to take climate change seriously. It's possible that buried within one of Epstein's columns or podcasts there is a mea culpa for the role he played in killing thousands of his fellow citizens, but if so, I missed it. Epstein certainly has not made any priority of a public expression of remorse.

In an essay on this blog last week, Professor Buchanan noted how Trumpian non-logic has come to supplant the ordinary illogic of ideological conservatives. I agree with and endorse that insightful analysis. In the balance of today's post, I want to suggest that the line between ideological conservatism and Trumpism will be increasingly difficult to draw.

To be clear, I don't want to equate Epstein with Trump. Epstein is an educated man, whereas Trump is an ignoramus. My personal interactions with Epstein have always been professional and pleasant. I doubt there are many people who have had any sustained contact with Trump who can say the same. Still, it takes a certain kind of shamelessness characteristic of the age of Trump to make a bold prediction that seems to influence public policy in a disastrous way and then neither retreat from public life nor issue a very public statement of regret.

While the absent apology may demonstrate the creeping stylistic Trumpism, to me the more interesting phenomenon is the merger of substantive conservatism and Trumpism. I can illustrate with the chief example that Professor Buchanan gives of traditional conservative illogic as distinct from Trumpian non-logic: the Laffer Curve. Recall that the Laffer Curve graphically illustrates the proposition that as tax rates increase, so do government revenues, but at some point T* the curve slopes downward. If taxes are high enough, people will stop working so hard or, more likely, stop reporting their income to the IRS. Here is the traditional Laffer Curve. 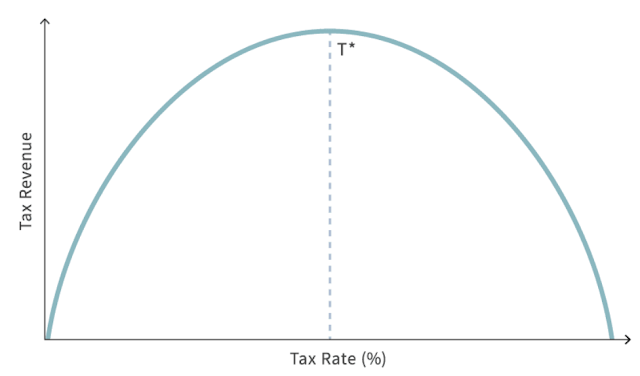 As Professor Buchanan explains, the core problem with the story that right-wing ideologues tell about the Laffer Curve is not that it is illogical but that it is empirically false. Conservative economists assume or falsely assert that T* is a much much lower rate than it actually is. Decades of data undercut the conservative dogma that lowering taxes will boost government revenues by spurring so much economic activity that the larger size of the pie will more than offset the smaller percentage. Whether T* is 80%, 90%, or some other very large percentage, it clearly is much much higher than conservative ideologues contend.
Now let's consider Epstein's case against government-imposed public health measures to fight COVID-19. It has four main elements. First, Epstein and others sometimes claim that even if public health measures save lives and health, the cost is too high. That's probably wrong even on its own terms, because effective public health measures allow better medium-term economic performance, but let's put that claim aside.
Second, Epstein claims on what he calls "Hayekian" grounds, that people if left to their own devices will take adequate health precautions. That also seems to contradict virtually all of the evidence of the last eight months and is, furthermore, illogical. Hayekian and other "market-ordering" views depend on the assumption that the aggregation of individually selfish behavior benefits the public, but with risks of COVID-19 distributed asymmetrically, some substantial measure of self-sacrifice by low-risk individuals is required.
Third, Epstein has pointed to the tendency of viruses to mutate to become less deadly over time. They do, but they do so on a much longer time-scale than the infection rate of COVID-19.
Thus, we come to the core of Epstein's case, which I can illustrate graphically. Real epidemiologists warn that without behavioral changes like avoiding gatherings, mask wearing, and social distancing, COVID-19 spreads exponentially. In the graph below, the red curve plots deaths over time if there is exponential growth. But wait! Epstein says that there is a fallacy here. A virus may start by infecting and killing people at a rate that seems to grow exponentially, but over time the curve naturally flattens for two reasons. First, people begin to take precautions (Epstein's false Hayekian claim), and second, the virus runs out of new people to infect. Thus, eventually the new-infection curve turns downward and the death curve flattens, as illustrated below when the blue upward-sloping curve flattens and (in my illustration) turns purple. The red curve reflects standard epidemiology. The blue-to-purple curve reflects what we now know to be grotesquely erroneous Epsteinedemiology.

Epstein is wrong about the claim that individual measures without government interventions have a very large impact. He might also be wrong about the virus running out of new people to infect. Whether it does turns on how long immunity lasts. It's possible that naturally acquired immunity of short duration would lead to a curve that looks like a gradually dampening sine wave. Nonetheless, let's assume that Epstein is justified in assuming that naturally-acquired immunity and other factors mean that the total-deaths curve eventually flattens. Even so, he is obviously wrong about when that occurs. 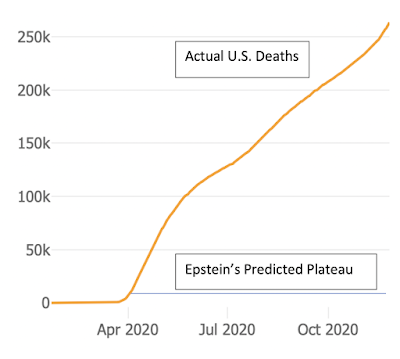 The graph above does not reveal just how wrong Epstein's analysis is, so I've rescaled the vertical axis to give a better illustration to the left, in a graph comparing Epstein's prediction (the blue line at the bottom) to the actual number of deaths in the U.S. based on data from the Johns Hopkins website (the yellow curve). With U.S. COVID-19 deaths rapidly approaching 300,000, we are again experiencing something like exponential growth in cases and deaths. Eventually the new-infection curve will slope downward and the total-death curve will flatten. With vaccines coming in the next few months, we can hope that will happen soon. But Epstein's assumption that the death curve would have flattened at around 5000 was wildly optimistic.

Is that just a coincidence? I think not.

Economists are notorious for building models based on dubious assumptions and then asserting that the models reflect reality, regardless of whatever contradictory real-world evidence exists. Raising the minimum wage, conservative economists say, will simply increase unemployment, even though so many other factors beyond price, supply, and demand for labor make the picture much more complex. Nonetheless, conservative ideologues (like Richard Epstein) continue to insist that higher minimum wages lead to increased unemployment. The fact that this proposition could be true suffices in their minds to make it true.

Likewise for the Laffer Curve. It is conceivable that we could live in a world in which T* is a tax rate of 28%, so conservative ideologues simply assert that tax cuts will not only boost the economy but pay for themselves through increased government revenues.

And so too for COVID-19. It was conceivable that the coronavirus would quickly mutate to become substantially less deadly or that individuals would take so many separate and uncoordinated actions to bring down the rate of spread to the point where the total-death curve would flatten at almost any particular number. Accordingly, conservative ideologues like Epstein and his acolytes in the Trump administration simply assert that this will occur at a level that is way way below the actual figure.

And now we can see how, despite lacking Trump's character defects, Epstein and other right-wing ideologues have something important in common with him: a commitment to making stuff up. More people could have attended Trump's inauguration than attended Obama's. COVID-19 could have gone away like a miracle or in response to sunlight brought into the body or ingested bleach. There is even a conceivable world in which George Soros and the ghost of Hugo Chavez conspired to create computer software that switched millions of votes from Trump to Biden (while not switching any down-ballot votes). Accordingly, Trump simply asserts that these things that are just barely imaginable actually happened.

The false propositions that Richard Epstein and other conservative ideologues believe and assert as truth are less lunatic than the things Trump says, but they are no less false for being so. The signature feature of both what passes for conventional conservatism these days and Trumpism is the willingness to make--and perhaps even believe--conceivable but clearly false claims, so long as they are sufficiently self-serving. It is a deadly trait.