The story swirling around Trump personal attorney Michael D. Cohen is unfolding so quickly that it is almost certainly too soon to say much that is definitive about it.  What is clear, however, is that following the FBI raid on his office, home, and hotel room (at the Loews Regency hotel on Park Avenue, his temporary digs during an apartment renovation), America is getting a perhaps much-needed lesson in the contours of attorney-client privilege, the crime-fraud exception, and the attorney-client relationship more generally. 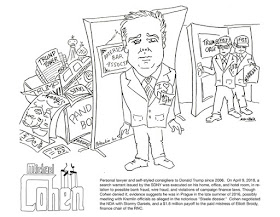 The "revelation" that Cohen's "mystery client" is Sean Hannity gave that high-profile college drop-out the opportunity to perpetuate several persistent myths about the attorney-client relationship.  On his radio show on Monday, April 16, 2018, Hannity said,


"I have known Michael [Cohen] a long, long time.  And let me be very clear to the media: Michael never represented me in any matter, I never retained him in the traditional sense for retaining a lawyer, I never received an invoice from Michael, I never paid legal fees to Michael."

Hannity said he "occasionally had brief discussions about legal questions" with Cohen, and that he assumed those discussions were protected by attorney-client privilege.  Hannity stressed that "not one of any issue" [sic] he ever dealt with Cohen on pertained to a matter between him and a third party.

Later, he "explained" further by saying that his conversations with Cohen "had to do with real estate."

Cohen's lawyers, by contrast, argued that with respect to Hannity (unnamed at that point), Trump, and Broidy, "the work was more direct legal advice or dispute resolution - more traditional legal tasks."

So first, let's be clear that the attorney-client relationship, which creates an evidentiary privilege shielding some communications between lawyer and client from involuntary revelation by the attorney against the client's wishes, does not require a pre-existing "matter."  A person can certainly seek and obtain legal advice covered by the privilege (and the more inclusive professional duty of confidentiality, which exposes to professional sanctions an attorney who voluntarily discloses what has been shared), without there being any pending "matter" (or any third party - consider a will-drafting attorney).

The distinction Hannity seems to believe in - between "retaining" a lawyer and seeking privileged and confidential legal advice - does not exist.  A voluntary relationship structured by the attorney's duties to the client (and some coordinating duties on the part of the client, including to pay fees if that is part of the agreement) has privilege implications. Receiving (or seeking) legal advice covered by the privilege just amounts to becoming that lawyer's client (or prospective client), even if just for the limited purpose of having a lawyer answer a question "about real estate."

What Hannity presumably means in denying he "retained him in the traditional sense" is that there was no formal attorney-client relationship memorialized (for example) by a retention letter or a fee agreement.  Such a letter or agreement, while certainly advisable, is not required to create the relationship.  (Model Rule of Professional Conduct 1.5(b) states that the scope of the representation and the basis or rate of fees must be communicated to the client, "preferably in writing," but this is not required.)

Moreover, the idea that establishing the relationship requires payment, and/or that in the absence of payment there is no attorney-client relationship, is one of the most tenacious errors in the layperson's understanding of the legal profession (perpetrated by TV lawyers like Saul Goodman).  It is not only that attorneys can do pro bono (unpaid charitable) legal work, although that is an obvious counterexample.  The more fundamental point is that what triggers an attorney's obligations of confidentiality (and renders certain communications privileged) has nothing to do with the exchange of money.  Buying silence is what Cohen did for his clients: his own silence did not need to be purchased - so long as he was actually acting as an attorney.

This is likely to become a crux of the matter.  Not everything said to or by an attorney is covered by the attorney-client privilege.  When a person who happens to be a lawyer gives business advice, for example, it is not protected.  This situation - which Cornell Law Prof. W. Bradley Wendel calls "the two-hats problem" - requires a determination of whether the client was consulting the lawyer as a lawyer (and not, for example, as a friend, business advisor, etc.)  If, as the SDNY investigation of Cohen's email accounts indicates, Cohen performed "little to no legal work" at the relevant times, attorney-client privilege will not be available to protect what was said by or to him.

And even when someone is acting as an attorney, the privilege is subject to some exceptions.  The most relevant of these here is the "crime-fraud exception."  There is no attorney-client privilege if the client's objective in seeking legal advice was to commit a crime or fraud.  When this is suspected, the U.S. Supreme Court in U.S. v. Zolin approved a two-part review process: first, in camera review of allegedly-privileged material is appropriate where there is a factual basis "to support a good-faith belief by a reasonable person" that this review "may reveal evidence to establish the claim that the crime-fraud exception applies."  The privilege itself is then pierced if there is "a reasonable basis to believe that the lawyer's services were used by the client to foster a crime or fraud."

This exception applies even if the attorney is entirely innocent of wrongdoing or knowledge of the client's intentions.  So much the worse, of course, if the lawyer is the client's co-conspirator or "partner in crime."

And finally, in Cohen's case, there may be crimes or frauds in which he himself engaged (whether with his client's knowledge, or not).  In relation to the Stormy Daniels matter, for example, if he made misrepresentations to any bank about the entity he created to facilitate the payoff, or arranged for someone to physically threaten her, no communications relating to such conduct would be privileged.

The lawyers representing Cohen argued that disclosure of Sean Hannity's name itself was a breach of privilege.  Judge Kimba Wood was having none of it.  Over a century ago, in 1915, a California attorney challenged his imprisonment for contempt over his refusal to name his clients (who retained him in relation to allegations of - wait for it - election fraud). The court reaffirmed the general principle that the fact that someone has retained a lawyer is not generally protected, although there are exceptions - including where (as a later court put it) revelation of the client's identity "would be tantamount to disclosure of a confidential communication."  Paradigmatic examples include a hit-and-run driver who hires a lawyer to negotiate a confidential settlement; or a person planning a divorce or business move that relies on the element of surprise.

Whether any such exception applies to Hannity is - at best - open to dispute.  Chatter on social media leapt to the conclusion that maybe Cohen negotiated a sex-scandal-related NDA for Hannity, too, but it has gained no real traction.  Cohen's lawyer Stephen Ryan (a Reagan-era organized crime prosecutor now at McDermott Will & Emery) found himself in the somewhat client-deprecating position of arguing that the mystery client's identity should remain private because he "would be 'embarrassed' to be identified as having sought" the counsel of...Ryan's own client.  (But then, Ryan would probably be embarrassed himself ever to have asked the likes of Cohen for legal advice.)  But this was not enough to protect Hannity's identity, and Hannity's non-disclosure of his professional relationship with Cohen - whatever its scope or content - led even the Trump-loving alien who has colonized Alan Dershowitz to chastise Hannity on his own show on Fox.

As matters currently stand, the court has denied the Trump team's request for a TRO to block the DOJ from reviewing the materials obtained in the raid (and their request to review them first).  She may well appoint a Special Master to review the materials seized by the FBI from Cohen's Long Island home, Loews Regency Hotel room, and what is referred to as his "office" at Squire Patton Boggs.  In fact, the space-sharing situation is a bit murkier (and more suspicious).  On March 21, 2017, Cohen created his own law firm, "Michael D. Cohen and Associates," and just two weeks later, he entered into a "strategic alliance" with the firm "to advance the interests of its clients" - one of whom just so happens to be Cambridge Analytica.  Cohen occupied an office on the 23rd floor of 30 Rockefeller Center, but had almost nothing to do with the firm's activities. The affiliation - now wiped from the firm's website - was promptly terminated on the day of the raid.)

When all is said and done, will Cohen be indicted in the Southern District of New York federal district court?  Will Cohen - the man who said he'd "take a bullet" for Donald Trump - do federal time for him?  Or, in Daniels' attorney Michael Avenatti's amusingly mixed metaphor, will Cohen "fold like a cheap deck of cards"?  If Cohen were convicted, would Trump pardon him for any federal offenses?

These are just a few of the questions about Cohen that await answers, and as to which the future is far from clear.  What is clear, however, is that the law of attorney-client privilege - its elements, exceptions, and procedures when attorney-client communications become evidence in a criminal prosecution - will occupy center stage.