How Determinate is Originalism in Practice?

When originalism began gaining traction in the 1970s and 1980s, its proponents frequently cited its supposed constraining impact on judges as a virtue. This claim fit well both with originalism's ideological origins and its nature at the time. Although appeals to the framers were a common trope in judicial rhetoric in prior periods, by the time originalism began to crystalize as an "ism," it was largely a program of resistance against what conservatives saw as the excesses of the Warren Court and, to the extent that the Burger Court built on or failed to cut back on the work of the Warren Court, the Burger Court as well. At the time, originalism was generally promoted as aiming at implementing the framers' intent, which was thought to be reasonably determinate in its concrete applications. E.g., if the framers of the Fourteenth Amendment did not intend (or expect) it to forbid most forms of sex discrimination, then arguments for sex equality under the Fourteenth Amendment were inconsistent with this first wave of originalism.

Partly in response to withering criticism, originalism morphed over time, so that most people (and nearly all academics) who call themselves originalists now claim that what binds is the original public meaning of the Constitution's text, rather than the concrete intentions and expectations of its framers and ratifiers. And because the original public meaning of the more open-ended clauses of the Constitution tends to be, well, open-ended, original-public-meaning originalism tends to be substantially less determinate than (at least the claims that have been made for) old-style original intent. Originalists solved the problem of seemingly having to support a view of the Constitution that allows official sex discrimination and other unacceptable practices by sacrificing determinacy.

Except that most original-public-meaning originalists cling to determinacy as a virtue. They no longer claim that originalism is close to fully determinate, but they still frequently claim that it is substantially more determinate than other approaches to constitutional interpretation. This claim is empirically testable. If originalism were a methodology that constrained justices, one would expect that a justice who practiced originalism would be somewhat ideologically unpredictable. And yet, as I shall explain, originalism in practice is predictably conservative.

I'll provide evidence for that claim momentarily, but first, I want to address a threshold objection. Perhaps originalism leads to conservative results because that's simply what an honest approach to uncovering the original public meaning requires. This is a prima facie plausible objection in various categories of cases. For example, perhaps the original public meaning of "commerce . . . among the several States" referred only to trade, not other economic activity, which would mean that an originalist justice would be less inclined to uphold federal power than a non-originalist justice. Given that "states' rights" codes as conservative, here honest originalism would have a conservative bent because of the nature of the historical materials, not because of any lack of constraint on the ideological preferences of the academics, judges, and justices who purport to practice originalism.

Moreover, we can expect that originalism leads to conservative results on average, not just in particular cases. That's because originalism is backward looking. Non-originalists will be more inclined to say that changing social attitudes warrant changing constitutional doctrine. And as those attitudes tend (on average over the very long run) to change in the direction of more liberal approaches, the resistance that originalism provides against change will be conservative.

Accordingly, I concede that the objection makes a valid point. Original-public-meaning originalism should lead to conservative results on average, even when practiced by an academic, judge, or justice with no ideological axe to grind.

Indeed, it would be astounding if an honest effort to unearth the original understanding of various constitutional clauses from the Founding and Reconstruction yielded the contemporary Conservative program--which reflects the peculiar mix of anti-regulatory business interests, social conservatism on gender relations, and white resentment of racial minorities that characterizes the current, highly contingent, Republican Party coalition. One would expect some overlap and even some net positive correlation given that there is some positive correlation between small-c conservatism and big-c Conservatism. But the sheer messiness of history and contemporary politics would mean that an honest originalist voting his or her methodological rather than ideological druthers would end up roughly center-right on average, with a high degree of variance.

Is that what we find when we examine the data? Not even close. When political scientists code for ideological valence of the issues that come before the Supreme Court, they find that the most consistently ideologically conservative justice is Clarence Thomas--who also most consistently espouses and purports to practice originalism. (Justice Gorsuch would likely be his twin but has not been on the Court long enough for a substantial dataset.) Here's a useful chart that I've lifted from a Stanford Business School website: 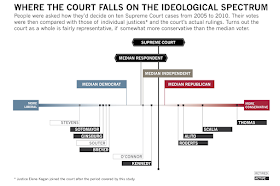 A great many other studies show pretty much the same pattern: The more consistently a justice espouses and purports to practice originalism, the more ideologically big-c Conservative he votes. That pattern contradicts the proposition that originalism has an on-average conservative lean with a high degree of variance. So what is really happening? The most natural explanation is that originalism might affect the style in which an opinion is written but has no more constraining force on how a justice votes than do other methodologies.

What's an academic originalist to do? If he thinks that properly applied originalism would be substantially less ideological than the improperly applied--i.e., ideologically very Conservative-- originalism we actually observe in the courts, he could say that there are not now nor have there ever been any "real" originalists on the bench. Even--and in light of the correlation discussed above we might say especially--Justice Thomas would not count as an originalist. Nor would his apparent methodological and ideological reinforcement, Justice Gorsuch.

But that move is highly problematic. It bears an uncomfortable resemblance to what communists in the west used to say when confronted with the murderous and otherwise disastrous record of Soviet and Chinese communism. That's not real communism, they would say, pointing to this or the other difference between Leninism or Maoism and what they regarded as the proper understanding of Marx. And the western communists were right, in a sense: the real-world efforts to build communist states ended up departing in various ways from the orthodoxy prescribed in the theoretical tomes.

However, at some point one must judge a prescriptive theory by the actual real-world results of the efforts to apply it, even if those efforts depart in some ways from the theory. That is why it is fair to pronounce communism a dismal failure.

We may be reaching the point where it is also fair to pronounce originalism--as anything other than a rhetorical smokescreen for extremely Conservative results--a failure. Unfortunately, as a result of Republican control of the presidency and the Senate, we are also in an era when the number of self-proclaimed originalists on the federal bench will increase.
Michael C. Dorf at 7:00 AM
Share