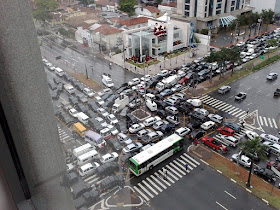 Horse-and-buggy transportation is a thing of the past, having been replaced early in the last century by the private automobile.  But we now know that the current system of transportation is on its way out, too, to be replaced by driverless cars.  How will that happen?

That is an enormous question, and I expect to write a series of columns over the next few months exploring various aspects of this inevitable transition.  To a large degree, I will focus on issues of technology and economics, especially the effects on public finances.  While all of those issues are interesting, however, I will focus here on how public psychology will respond to this change in technology.

This is actually my second column discussing driverless cars.  Late last year, I responded to an inadvertently funny New York Times guest op-ed, in which an author had laid out a number of baseless complaints about the move toward driverless cars.

Although the author of that particular op-ed was most likely motivated by her or his position as a lawyer for an automotive magazine, even people whose livelihoods are not directly affected by this impending change have strong opinions about the prospect of no longer driving their own cars.  Therefore, it is worth thinking about the general public's reaction to the coming of driverless cars.

It is fair to say that, to this point, the most common reaction in discussions of driverless cars has simply been skepticism about the technology.  How can it be safe to sit in a car that is being driven by a computer?  Would we helplessly watch ourselves being driven into collisions?

The short answer to this question is that driverless cars will not be approved for use until it is clear that the technology is where it needs to be.  As I noted in my column in December, not only is the public going to demand high levels of proof, but the companies pushing the new technologies know that they need to get it right the first time.  A body count -- even one much lower than the tens of thousands of deaths on U.S. roads every year -- would immediately cost those companies billions of dollars while creating even larger psychological barriers in the public's mind to future reintroduction of driverless cars.

Again, however, the public psychology already has a strong presumption against driverless cars.  How will that be overcome?  Note that I am asking how it will be overcome, not whether it should be, because even though I personally am looking forward to the days of driverless cars, there is little doubt that those days will soon be here.

As a background matter, we should remind ourselves just how often people claim that public attitudes can never be changed, only to see those attitudes change rapidly.  As one prominent example, people said that New York City's smoking ban in restaurants and bars was crazy (and unenforceable), but it is now so normal that I had to Google the issue to remind myself when it went into effect.  (It was 2003, but by the time I briefly moved to New York in 2005, it was already old news.)

Today, it would be odd to find a major city in the U.S. and many other countries that allows smoking inside public accommodations.  Even Paris's opposition is now on the margins, with fights over "closed-off terraces" being the big enforcement fight after only a few years of that famously chain-smoking city's ban.

Similarly, many people once treated drunk driving as a joke, but that changed in only a few short years in the 1980's.  And it is not difficult to find movies and TV shows -- even situation comedies -- into the 1960's and 1970's in which spousal abuse was taken to be unexceptional (and unobjectionable).  Although such abuse is sadly still with us, social attitudes have changed radically for the better.

How long did it take the majority of people in the U.S. to get used to same-sex marriage?  In 2004, George W. Bush's reelection strategy included efforts to put completely duplicative same-sex marriage bans on the ballots in key states, in an effort to bring out voters who would then vote for Bush.  By 2016, however, there was no electoral advantage at all to such bigotry.

Still, these analogies are imperfect.  Even though social attitudes can adjust quickly, there are aspects of driverless cars that simply scare people.  One key concern is the loss of control.  People have the idea that they want to be able to be their own drivers because then they can prevent bad things from happening to themselves and their families.

There are a number of reasons to think that this knee-jerk reaction will fade quickly.  First, it is a simple fact that people turn over control of their lives to others all the time.  Every time we board an airplane, we are putting ourselves at bodily risk.  Notably, although there are human pilots, most of the flying is actually now done by computers.  And the shuttle trains in many airports that move people from check-in to their gates are fully automated.  We are actually more comfortable handing over our lives to technology than we realize.

Second, the control that we have over our lives when we drive a car is largely illusory.  Some readers might remember the 2003 version of the caper film "The Italian Job," in which a computer hacker takes over the Los Angeles traffic network, adjusting stoplights to create accidents and to induce gridlock as part of a scheme to force his targets to go where he wants them to go.

Although there is the separate issue of driverless cars possibly being hacked (which is another version of the question of perfecting the technology), the point here is that even the non-hacked system in LA involves a roomful of people and computers that are truly in control of what happens on the roads.  The notion that we are in charge when we are behind the wheel is a pleasant fantasy.

Third, consider the photo above.  Where was it taken?  If your answer was, "It could be anywhere," that means that you have not been living under a rock.  (As it happens, that particular traffic jam was in Sao Paulo, Brazil.)  Living in a major city that has a subway system, I have the option of driving or riding.  When the Washington Metro experiences a delay, I cannot help but think, "Geez, if only I were driving, I'd be home right now."  But when I look at the roads, I realize that I am moving faster than the people who think that they are bold individualists who control their own fates.

The other reason to think about that photo is that it illustrates just how absurd it is to rely on a transportation system in which people are individually trying to navigate in the midst of (and in competition with) other drivers.  A gridlocked intersection is the aggregate result of a number of bad individual decisions, the most innocent of which is that people too often enter an intersection immediately before the light turns yellow and then find themselves with nowhere to go, forward or backward or to either side.

And even though many people do not trust experts when it comes to economics or foreign policy, this is a matter of simple engineering and technology, which the public trust much more readily.  (There is a reason that the late Steve Jobs was treated like a rock star.)  Any first-year engineering student could write the algorithm that would allow cars to merge and to keep traffic flowing, so this is not just a technology problem but a conceptually simple technology problem.

Again, I am not saying that people will read a column like this and suddenly exclaim, "Oh, now I see!  My concerns were so silly."  It will take time for people to adjust, but because the underlying logic of individually operated cars is so indefensible (and the costs in lives and dollars so high), my prediction is that people will adjust surprisingly rapidly, just as they have done so many times before.

Any changes to the way we live our daily lives does require some psychological reorientation.  When email became available, people sometimes called the recipients on the phone to make sure that messages went through, and many other people claimed that written letters were irreplaceable.  Online banking was also a major breakthrough, but it required people to believe that they could trust their banks to take advantage of the internet securely and reliably.

But what about pure emotion?  American mythology is in many ways built upon romanticizing the open road, and many people (including me) often feel that there is almost a zen-like inner peace that sets in on a long drive.  The thing is that people used to say that about riding their horses.  A superior technology soon dominated and replaced an inferior (and cruel) one.

I have no doubt that there will be car theme parks in the future, and that some people will pay money to be able to experience what it feels like to hit the accelerator and feel the wind in their hair, even if doing so is limited to controlled areas.  As driverless technology improves, however, and especially as people are faced with the possibility of avoiding the needless costs of car ownership, emotion will quickly give way to practicality.

At some point, we might find that driverless cars will also be superseded by something even safer and cheaper.  Maybe the creators of "Star Trek" correctly predicted that we will soon figure out how to transport matter through space and then reassemble it, making travel as we know it meaningless (and killing the driverless car industry).

When that new technology, or something that no one has yet imagined, comes into existence, we can be sure that people will mythologize the halcyon days when people could sit comfortably in driverless cars, reading and relaxing while watching the world go by (and no longer dying in large numbers in accidents caused by human error).  Ah, the good old days!
Neil H. Buchanan at 7:00 AM
Share