Highlights of the GOP Game Show "Who Wants to Destroy the Republic?"

Tonight is the grand finale of the Republican National Convention. To preserve my mental health, I have watched almost none of it. In the old days, that might disqualify me from commenting on the proceedings, but no longer. Donald Trump hasn't read the Constitution, but that didn't stop him from promising to defend all of it, even the parts that don't exist. In the age of Trumpiness, I seem perfectly suited to comment on the Convention thus far. Here is what happened:

1) The Dump Trump movement fizzled after a first day of contentiousness, so yes, Trump is actually the GOP nominee. All around the country, people are Googling "how to cook hat."

2) There were loud speeches by celebrities and politicians whose sell-by dates have long passed (Scott Baio, Rudy Giuliani), as well as from others whose expiration dates are rapidly approaching (Duck Dynasty guy, future over-priced security-firm consultant Chris Cristie).

3) Each night has a different "Make America _____ Again" theme. Nonetheless, the overarching theme of the convention is that Hillary Clinton is a criminal traitor because Benghazi. And emails. Accordingly, she should be imprisoned or shot. Also, Obama is still a Muslim.

4) Donald Trump's children made speeches in which they said that their father, who inherited millions of dollars from his own father, taught them the value of hard work and making it on their own. These speeches were well-received because Trump's children are attractive and, remarkably, do not seem like they are the offspring of a narcissistic sociopath. And because, let's face it, we are grading on a curve.

5) Melania Trump gave a speech that would have been well-received and should have added to the mystery of how people who seem at least outwardly not-completely-awful can not just tolerate Trump but love Trump. However, Melania's praise for her husband and inspiring story of coming to America were completely overshadowed by the fact that she lifted some lines for her speech from Michelle Obama's speech at the 2008 DNC. This tempest in a teapot ballooned into big news because, instead of a simple "oops," Trumpworld went into attack mode, blaming--wait for it--Hillary Clinton for trying to take down a strong female challenger. Then, just hours after Trump's campaign manager repeatedly refused to acknowledge that there was any plagiarism, a Trump Clan apparatchik confessed to the copying. Trying to make lemonade out of her shame, she then used this first-ever Trump almost-apology as an opportunity to praise the magnanimity of the Dear Leader in Trump Tower.

6) On night 3 -- "Make America Cringe Again" -- some of Trump's one-time rivals for the nomination paid homage to their conquering hero, or at least talked for a while. We heard from Little Marco Rubio and Dropped-Out-Too-Soon-To-Earn-A-Nickname-From-Trump Scott Walker. The most talked-about speech of the night was delivered by Lyin' Ted Cruz, who urged GOP delegates to vote their conscience. He was then booed, apparently because the delegates believed Cruz has the sort of conscience that a normal human being has and was therefore urging them to vote for someone other than Trump. Go figure.

7) Mike Definitely-Trump's-top-choice Pence took his star turn on night 3 as well. He smirked quite a bit and also nodded knowingly a lot. He mixed standard right-wing talking points with praise for Donald Trump, whom he has seen up close for a few hours. Pence also thinks well of Trump's kids, whose speeches he has heard. Most important, Pence was definitely a white guy. He showed why, of all the people who were not Chris Cristie or Newt Gingrich who were willing to be Trump's running mate, Trump chose him.

8) Speaking of the Pence selection, yesterday's NY Times carried a story detailing the process by which Trump picked him. The supposed takeaway is that Trump's "winnowing of his initial wish list reveals a distinct blend of practicality, impetuousness and disengagement." That's true and it bodes ill for a Trump presidency, but the headline ("How Donald Trump Picked His Running Mate") fails to capture the truly amazing detail revealed in the first four paragraphs. In May, Donald Jr. asked an adviser to John Kasich if Kasich would be his dad's running mate, offering that if so, Kasich could be in charge of both domestic and foreign policy.


Then what, the adviser asked, would Trump be in charge of?
“Making America great again” was the casual reply.

Apart from showing that Junior has a sense of humor, the anecdote is revealing, and like just about everything else we know about Donald Senior, would be disqualifying in any other candidate. But with Trump, the idea that he would delegate all of his power to a less-volatile VP might be reassuring. Indeed, upon reading the story, I wondered whether Trump's own people might have leaked it to bolster support.

That is not to say, of course, that the offer to Kasich should be reassuring. Despite his campaign as a soft-hearted compassionate conservative, Kasich is in fact quite right-wing, but he is practically Bernie Sanders compared to Pence, who presumably would be the guy in charge of all policy now that he's Trump's running mate. Still, one might think, even if Pence will promote horrid policies, he won't start a global depression-inducing trade war or worse over a personal slight, the way Trump might, right?

Wrong. Junior might have been joking, but it is not difficult to imagine what he had in mind by proposing that Senior would be in charge of making America great again--namely, running his mouth. So while Pence might recommend, say, not imposing a 45% tariff on Chinese goods, his boss would shut him up. If you think that Trump would be capable of taking advice from, much less being overruled by, Pence, you didn't watch the running-mate rollout speech or the 60 Minutes interview. Trump showed that "Mike Pence" is simply Hoosier for "Chris Cristie," which in turn is Jersey for "guy standing awkwardly on the side while Trump brags and free associates." Also, after initially unveiling a Trump/Pence sign in which the T was penetrating the P, the campaign settled on a simple name over name sign. Needless to say, the "Trump" is in a larger font than the "Pence." 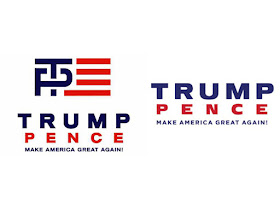 9) It all comes to a climax tonight, when Trump gives a speech accepting the nomination. I will be sure to miss it.
Michael C. Dorf at 7:00 AM
Share
‹
›
Home
View web version