Monday's SCOTUS ruling in Foster v. Chatman--finding that Georgia violated Timothy Foster's right to a capital trial before a jury selected without racial bias--makes no new law. The majority opinion of CJ Roberts methodically parses the trial record to show that Foster made out a prima facie case of racial bias and that the prosecutor's ostensibly race-neutral justifications for using four of the nine peremptory challenges it had to eliminate all of the Black jurors were, not to put too fine a point on it, bullshit. The Chief shows how the prosecutor's story was internally inconsistent and highlights documentary evidence that is pretty damning, such as the following notes:

It would have been remarkable had the case come out the other way, except of course it did come out the other way in the Georgia courts. And Justice Thomas dissented, partly on the ground that, as he read the record, the most recent Georgia ruling was not on the merits and thus there was no SCOTUS jurisdiction. But Justice Thomas also thought that his seven colleagues gave inadequate deference to the factual findings of the Georgia courts that there was no racial bias after all.

Over roughly the last three decades, scholars and pundits have sometimes observed that racism in America is not what it once was. Out-and-out Klansmen are a rarity, the argument goes, with institutional racism and unconscious bias as the main problems today. There's some truth to that, but a case like Foster shows that "classical" race discrimination is alive and well.

Perhaps as troubling as the overt racism is the denial (or more charitably, credulity) by people who are not themselves racists. Justice Thomas is not himself a racist, especially not an anti-Black racist, but his acceptance of the Georgia lawyers' and courts' explanations in Foster enables race discrimination. We can even assume that most of the judges and lawyers trying to preserve the conviction in Foster are not themselves racists. Foster did, after all, confess to the murder for which he was convicted and sentenced. Whatever the error charged by the petitioner, these judges and lawyers presumably would have tried to argue that no retrial is necessary. Still, in doing so, there are places that a responsible judge or lawyer does not go.

Is Foster an isolated egregious case? I don't think so. Consider the ruling of a federal district judge granting a writ of habeas corpus in Bennett v. Stirling a couple of months ago. Another court in a state of the former Confederacy--this time South Carolina--affirmed the conviction and death sentence of a Black defendant who contended that his trial was infected by race discrimination. In Bennett, the state courts used double-speak to deny that one of the jurors was racially biased even though, when asked why he voted to convict Bennett, the (white) juror replied: "He's just a dumb nigger." Res ipsa loquitur. Except, apparently, in the South Carolina courts.

But wait, that's not all. As an alternative basis for granting the habeas petition, the federal judge cited multiple occasions on which the prosecutor appealed to the all-white jury's presumed racial prejudice. These included noting (irrelevantly) that the defendant had (apparently consensual) sex with a "blond-headed woman," which, the state argued, did not reveal that said woman was white. In arguing to the jury, the prosecutor called the defendant  a "monster," a "caveman" and a "beast of burden." He said the jury should give the death penalty because otherwise encountering him would be like meeting "King Kong on a bad day." The prosecution denied that any racial imagery was intended or understood.

The federal district court opinion contains a sophisticated discussion of the history of racially loaded comparisons of Black men to apes and monkeys, including (in the official copy but not the version linked above, which is text-only), the following promotional poster from the 1933 movie. 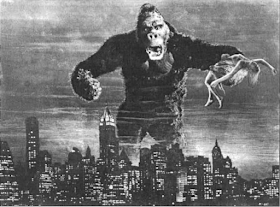 The court notes that when the film was released in Germany it was titled "King Kong and the White Woman." The average South Carolinian doesn't know that, but it blinks reality to deny the existence of the racial stereotype. As a proponent of animal rights, I would welcome the day when comparisons of any humans to other primates (or cows, pigs, or chickens, for that matter) would not carry a pejorative implication, but that day most certainly is not yet here.

To be clear, I'm not saying that all or even many of the lawyers or judges in the South are racists. I am saying that by denying the obvious, they are enabling racial bias to infect the criminal justice system. That infection is pervasive, requiring structural solutions to a structural problem. But while we wait for those, the least we can expect is that when old-fashioned racism rears its head, lawyers and judges recognize it for what it is.

So far, that hasn't happened. The state has filed a notice of appeal in Bennett. The decent thing to do would be to drop it and confess error.
Michael C. Dorf at 7:00 AM
Share
‹
›
Home
View web version