How to Live Greatly in the Law

Last night I had the honor of delivering some brief remarks to the soon-to-be-graduated JD class of 2018 at Cornell Law School's 3L Dinner. On most such occasions I speak off the cuff. For this one I chose to write out my speech. I deviated a bit from my prepared remarks, but not that much. They follow:

I am very honored to have been chosen as your faculty speaker tonight. Not chosen by you, of course. That would be too much to ask. Rather, I was chosen by the dean. Or at least I was asked by the dean. Perhaps he asked a dozen or more of my colleagues who turned him down before he got to me. In any event, however it came about, I am honored--or at least pleased--to be with you this evening. 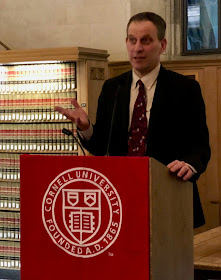 In preparation for this event, I conducted two surveys. On Sunday, Professor Colb and I hosted four second-year students who won a dinner at our house as part of the auction conducted at Cabaret. I told them I would be speaking to you and asked whether I should be funny or inspirational. They recommended funny.  I have chosen to ignore their advice. I shall try, likely in vain, to inspire you.

I also polled a few of my former students who were in both my constitutional law class as 1Ls and my federal courts class as 2Ls. I traditionally spend the final few minutes of the last class of each semester imparting a few words of wisdom, either those gleaned from my own experience or stolen from some inspirational sage like Franz Kafka or David Sedaris. I didn't remember what I had told the students in those classes and, not wanting to repeat myself, needed a reminder. Having received it, I shall now proceed to say something completely unoriginal, but at least not something I've said before on a similarly valedictory occasion. 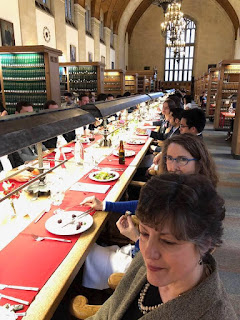 The completely unoriginal things I want to say come from a speech by Oliver Wendell Holmes, Jr. Now, I readily admit that Holmes was a complicated person. As Professor Alschuler argued, Holmes was an enthusiastic social Darwinist and more or less a nihilist. His infamous opinion in Buck v. Bell -- in which he upheld compulsory sterilization on the ground that "three generations of imbeciles are enough" -- was not exactly an outlier in Holmes's thinking. That said, I believe in taking lessons where I find them, even if delivered by flawed people. And whatever else one might say about Holmes, he sure could turn a phrase.

For tonight's text, I consider a speech that Holmes delivered to a group of Harvard undergraduates in February 1886. Holmes told them how great it would be to be a lawyer. Perhaps the number of LSAT takers was down in 1885 and Holmes was recruiting for law school. Or perhaps Holmes didn't realize that he was talking to undergrads rather than law students. History does not record. In any event, so much for the occasion. What did Holmes say?

In good law professorial form, he posed a question: "How can the laborious study of a dry and technical system . . . make out a life?" He answered his own question in the lines for which the speech is most famous:


the law is not the place for the artist or the poet. The law is the calling of thinkers. But to those who believe with me that not the least godlike of man's activities is the large survey of causes, that to know is not less than to feel, I say -- and I say no longer with any doubt -- that a man may live greatly in the law as well as elsewhere; that there as elsewhere his thought may find its unity in an infinite perspective; that there as well as elsewhere he may wreak himself upon life; may drink the bitter cup of heroism, may wear his heart out after the unattainable.

People quote that one line -- "Live greatly in the law" -- at lawyers' retirement ceremonies and funerals, and rightly so. However, I want to focus on what Holmes says about how one should live greatly in the law. The key is what he says later in the speech. Holmes adds:


But do not think I am pointing you to flowery paths and beds of roses, -- to a place where brilliant results attend your work, which shall be at once easy and new. No result is easy which is worth having. Your education begins when what is called your education is over . . . .

First, it's not quite right that no result worth having is easy. You might win the lottery or stumble into some other windfall. It's generally correct that the rewards worth winning require hard work, just not always.

Perhaps more important may be a kind of corollary: that hard work is often its own reward. Those of you who have taken my Federal Courts class will be familiar with my view of the law of habeas corpus as a collateral remedy: The doctrine is so strewn with roadblocks that it is nearly impossible to obtain relief for a habeas petitioner; if you want to win cases, represent the state; but if you want to have a chance to make a difference -- and to use your lawyerly skills in the bargain -- represent petitioners.

Second, Holmes says that your real education starts when you are done with your formal education. There's some truth there too, but as a person responsible for a chunk of your formal education, I would say it's hardly the whole truth. In my own experience, even now more than thirty years since I started as a law student, I find that when I come across a problem in an area in which I took no classes in law school, I am at a loss, whereas I can fit even quite novel problems in areas where I took one or more classes into a familiar framework and thus make some headway.

It isn't. At a bare minimum, you'll need to satisfy your continuing legal education requirement to remain in good standing with the bar, but that's not all that I have in mind. From time to time you should enroll in classes that have nothing directly to do with the law and serve no practical purpose.

A few years ago I took guitar lessons. A few years before that I took an acting class. I am confident that my guitar teacher and my acting teacher would tell me the same thing if I asked what they thought about my work with them: They would say "don't give up your day job." Nonetheless, I found both sets of classes enormously valuable and not just as a means of checking my ego. There is something exhilarating about undertaking a brand new study.

Think back to your first couple of months of law school. You may recall anxiety, sleep deprivation, and mental frustration. But having made it this far, you will also recall something else -- the thrill of a steep learning curve and the moment that it clicked. You were no longer highlighting every word of the page. You no longer needed to brief every case to know the holding. You just knew. If you look at it closely, you will see your life divided into the before part and the after part.

You can never go back to the before and so you can never again feel that first-time click -- at least so far as the law is concerned. But you can find it in other endeavors. Learn to sing and dance. Try cross-country skiing. Study Portuguese. Whatever you do, don't stagnate.

So by all means, live greatly in the law, but even more, just live greatly.
Michael C. Dorf at 7:00 AM
Share