With preseason basketball now underway and the regular season set to begin in just over two weeks, the NBA may soon have to decide what to do if any players take a knee or register some other protest during the pre-game playing of the national anthem. Last week, NBA Commissioner Adam Silver noted that NBA rules require players, coaches, and trainers to "stand and line up in a dignified posture" during the playing of the national anthem. Silver has declined to say what discipline, if any, will be imposed on players (or coaches or trainers) who break the rule. But his explanation of his expectation that they will comply betrays a basic misunderstanding of principles of free speech.

Because the NBA is not the government, it--like the NFL--is not bound by the First Amendment. However, Silver's statement indicates a laudable policy of voluntarily adhering to principles of free speech. The reasoning goes something like this: A professional sports team need not begin its games with a patriotic ritual, but if we're going to do so, we want to uphold the principles the ritual and the flag represent, not just perform an empty ritual.

So far so good. The difficulty comes with Silver's implementation of free speech. He appears to be saying that NBA players have numerous opportunities to speak out publicly on important issues--such as deadly racial bias in policing and the response to such bias in the courts--and that because they have those other opportunities, they don't need to use the playing of the national anthem to make their point.

Why is that wrong? Because the availability of alternative means of communication is not invariably a legitimate ground for suppressing speech and is never a ground for compelling speech.

Governments--and remember that, for present purposes we will treat the NBA like the government because of its laudatory decision to apply principles of free speech to its own operations--may enforce reasonable content-neutral time, place, and manner restrictions if they leave open adequate alternative channels of communication. That test appears in a 1989 SCOTUS case and has become canonical.

What counts as an adequate alternative? The SCOTUS cases don't provide much direct guidance, while lower court cases tend to focus on whether the speaker has comparable opportunities to reach her intended audience. If New York City denies a permit for a parade down Seventh Avenue but allows a parade at the same time requested on Fifth Avenue, that's clearly an adequate alternative. If the only parade route offered is on Staten Island, not so much.

Does the opportunity to speak to reporters on media day or to tweet "U Bum" at the president count as an adequate alternative to a national anthem protest or is it more like Staten Island? That may not be the right question.

The alternative-channels-of-communication test applies to content-neutral time, place, and manner restrictions. There is a sense in which the NBA's rule is content-neutral: Whether a player is protesting racist policing by taking a knee, expressing his solidarity with the president by mock-grabbing a female fan's crotch, or making no particular point at all but limbering up for the game by doing pushups, he would be in violation of the NBA's "stand . . . in a dignified posture" rule. The NBA rule is content-neutral in the sense that it doesn't target any particular message by players (or others) who violate it.

Yet in another sense the rule is obviously not content-neutral. It applies during the playing of the national anthem, not during timeouts or at any other time when other music or no music may be playing. A truly content-neutral time, place, or manner restrictions advances an interest unrelated to the suppression of ideas--such as traffic flow or protecting the grass in a public park. The NBA's interest in having players stand in a dignified posture, by contrast, serves an interest in controlling what messages are sent during that time.

Moreover, Silver's invocation of alternatives presupposes that players who wish to take a knee are simply trying to make a point: Fine, he says, but let them make the same point at a different time. The problem is that taking a knee is not simply symbolic speech; it is also symbolic non-speech.

Because defenders of the protesters, including some protesters themselves, have been at pains to deny that their protest is unpatriotic, they have tended to emphasize that in taking a knee they aim to make an affirmative point about racially biased policing rather than to express disrespect for the flag. We can grant that, as NFL player Eric Reid wrote in the NY Times, he and Colin Kaepernick "chose to kneel because it’s a respectful gesture," but at the same time note that by kneeling during the playing of the national anthem, the protesting players are also expressing disagreement with the national anthem.

How so? The core idea is straightforward enough: The flag symbolizes the nation and the ideals to which it is committed, including, as the anthem concludes, that America is the "land of the free," but in reality, millions of black and brown Americans are not truly free, because they must fear the police. Kneeling during the anthem is not a protest against the flag or against America, but it is a protest against standing supportively for the anthem despite injustice. When Reid, Kaepernick and others take a knee, they are thus both making an affirmative point and refusing to participate in a ritual. Denying them the right to do so thus amounts to compelled speech.

A moment's reflection should make clear that the existence of alternative channels of communication cannot undo a violation of the right not to speak. If New Yorkers for Blind Patriotism want to hold a parade down Seventh Avenue during which they wave the flag, recite the pledge of allegiance, and sing the Star Spangled Banner, then the application of a content-neutral permitting process that offers them Fifth Avenue instead does not run afoul of NYBP's interest in free speech. By contrast, if a school child or a professional athlete refuses to participate in the Pledge of Allegiance or the national anthem, then it is a non sequitur to say to him that he can make whatever affirmative points he wishes to make on another occasion. Allowing him to speak what is on his mind at some other place and time does nothing to remedy compelling him to speak what is not in his heart in the here and now.

There is more. Even were we to apply the alternative channels test, it is hardly clear that Commissioner Silver's suggestions suffice. Compared with a protest during the national anthem, press access and social media are Staten Island.

As we have just seen, the act of kneeling during the national anthem conveys a complex set of ideas about the meaning of patriotism. These ideas can be expressed in other ways. Reid's NY Times op-ed does an excellent job of doing that. But the question isn't whether there is an alternative. The question is whether there is an adequate alternative. For the answer to be yes, the alternative must be roughly comparable.

Consider Cohen v. California, the 1971 case in which the Supreme Court invalidated a conviction under a disturbing-the-peace law for the wearing of a jacket bearing the words "Fuck the Draft." After rejecting as inapplicable various state grounds for defending the conviction, the Court concluded that it suppressed speech. Assuming that the Court was correct to treat the law, as applied, as directed at speech, would it have made a difference to the outcome if the state had pointed out that Cohen had an alternative? He could have written a newspaper op-ed or distributed a leaflet explaining why he opposed the draft and the Vietnam War. Should that possibility have made a difference?

The very idea that a newspaper op-ed is an adequate alternative to making oneself into a profane human billboard stretches the notion of adequate alternative beyond any sensible utility. Unfortunately, I do not happen to have Marshall McLuhan right here, because he's been dead for 37 years, but I do know a little of his work, and while the medium isn't always the message, sometimes it is an essential part of the message. There may be ways of calling attention to the problem of racial bias in policing that are as effective as or even more effective than taking a knee during the playing of the national anthem, just as "Fuck the Draft" on Cohen's jacket may not have been the most effective way to stop the Vietnam War. But the question isn't whether there are adequate alternative ways of accomplishing one's ultimate policy goals. The question is whether there are adequate alternative channels of communication for the message at issue. 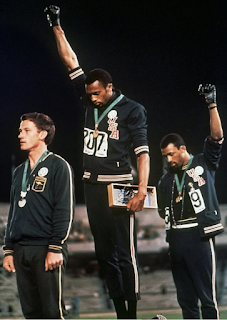 Finally, in the interest of being productive, I offer a suggestion for any NBA players who want to protest but also don't want to risk an NBA crackdown. Consider the raised fist salute employed by Tommie Smith and John Carlos (not to mention Peter Norman) at the 1968 Mexico City Olympics. It already has a history of association with both civil rights and Star Spangled Banner-based protest. What's more, it complies with the letter of the NBA rule. Smith and Carlos are standing and dignified. In response to such a gesture by any NBA athletes, Commissioner Silver could not invoke the existing rule, and while he may feel committed to enforcing the existing rule when it's violated, my guess is that he does not want to create a new one, at least not in the current climate, in which doing so would be widely regarded as siding with Donald Trump over Steph Curry, LeBron James, and the rest of the league.