The Impossible Burger: A "Pythagorean" Dialogue on Vegan Marketing

Preface: On a recent trip to NYC, we had occasion to try the "Impossible Burger," a vegan burger made by Impossible Foods. 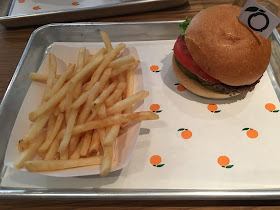 The Impossible Burger is not yet widely available. We tried it at Momofuko Nishi in NYC. It is far from a vegan restaurant. Our experience prompts this dialogue, fashioned "Pythagorean" rather than Socratic in recognition of Pythagoras's vegetarianism. The views expressed by the characters "Sherry" and "Michael" are not necessarily our respective views.

Sherry: This is a delicious burger. I'm not sure it's qualitatively superior to all other vegan burgers, but it sure is tasty. I could see ordering a second one.

Michael: I agree about the taste, although frankly, it has been so long since I last ate meat that I can't really judge one of the apparent main selling points--the claim that it tastes just like an animal-based burger.

Sherry: But in a way that doesn't matter. What matters is that its flavor and texture are terrific, and non-vegans can therefore taste for themselves that they would not be missing anything if they made the switch.

Michael: I get that the rollout strategy of Impossible Foods is to appeal to the general public, and that's why we're eating ours in a non-vegan restaurant. I must say, however, that this approach has a downside. The fact that it comes with dairy cheese on a non-vegan bun unless you specifically ask for the vegan version tends to blunt any likely generalization. I doubt that a lot of people leave Momofuku thinking that they should now go vegan, because they haven't even had a vegan meal there.

Sherry: That's setting a very high bar. Few singular culinary experiences will be enough to persuade a non-vegan to become vegan. I was impressed to see that almost everyone in the restaurant was making a point of ordering the Impossible Burger, when they may never have tasted a vegan burger before. That alone could be transformative.

Michael: I hope you're right. As you recall, I asked the people at the next table why they had ordered it, because I was curious about the motivation of non-vegans for trying a vegan burger, even if one that was served with dairy cheese on a non-vegan bun. They said they were eager to try something new and they were fans of David Chang (the owner of Momofuku). I worry that after trying and enjoying the Impossible Burger, they and others like them will move on to the next foodie fad.

Sherry: I acknowledge that that's possible and that many of the people there will do exactly what you predict. However, I think that some number will be bitten by the vegan bug and want to try other vegan products to see whether there's a whole world out there that they have been missing. The goal of the rollout is to whet their appetite, and I think this burger did that in a teasing and skillful way. Had they served the burger at a vegan restaurant instead, where the buns and cheese would have been vegan too (and not just for those who requested it that way), the impact of the rollout would have been blunted and mainly limited to pleasing the vegans.

Michael: I agree that we vegans are not easily pleased! And I want to be clear that I think Impossible Foods is doing very positive work here. But I think the work that they are mostly doing is reducing individual demand for meat, rather than creating a path to veganism. Reducing individual demand for meat is a good thing. I would rather that non-vegans eat less animal product than more animal product. So I'm not unhappy about the rollout. My point is simply that veganism is an entire philosophy, and that to adopt it, one needs reinforcement and social support. One is not likely to get that at a non-vegan restaurant. After all, nearly all non-vegan restaurants already serve some vegan items: e.g., salad, french fries, iced tea, whatever.

Sherry: I definitely agree about veganism as a philosophy and about the need for social support, but I think that maybe customers at Momofuku will find both of those things elsewhere when they might not have bothered to, absent their exposure to the Impossible Burger. Plus, the very act of choosing to stand in line to order a vegan burger can come to be meaningful to the individual who watches his own actions and makes judgments about his own values on the basis of those actions.

Michael: As long as we're being so agreeable, let me raise one other issue. If we are trying to sell veganism to the masses on the sly, as it were, then don't you think we somewhat undermine that effort by selling them what had to be a pretty unhealthy meal? After all, one of the big selling points of veganism is that if done the right way, it's very healthy. Yet here we have a meal consisting of french fries and a burger on a white flour bun. Indeed, one of the supposed selling points of Impossible Foods burgers relative to other vegan burgers is that the Impossible burger is like an animal-based burger in containing heme iron. Yet heme iron is much less healthy than non-heme iron found mostly in plants. I suppose that even with all of that, an Impossible Burger isn't as unhealthy as a burger made from ground-up cows, but that's a pretty low standard.

Sherry: While you make a good point, I would highlight two features of people's resistance to becoming vegan. The main one, I believe, is the worry that they will no longer enjoy their food. And secondarily, people are concerned about getting enough protein, calcium, etc. The Impossible Burger dispels both of these myths because it is delicious and has plenty of protein. Once people decide they are comfortable with the idea of becoming vegan, there is plenty of time to introduce them to a more wholesome way to eat. And even longtime vegans can enjoy an occasional indulgence.

Michael: Fine. So long as it is only occasional. For the sake of my waistline, I'm glad that the Impossible Burger hasn't made it to Ithaca yet.
Michael C. Dorf at 11:17 AM
Share
‹
›
Home
View web version