If you were writing a post-Civil War-era bodice-ripping romance novel set in Alabama, you couldn't do much better than to name your hero "Jefferson Beauregard Sessions" - after Confederate States of America President Jefferson Davis, and General P.G.T. Beauregard, who oversaw the Battle of Fort Sumter, which began the Civil War.  Of course, a romance-novel hero probably wouldn't bear such a striking resemblance to cookie mascot Ernest J. Keebler. 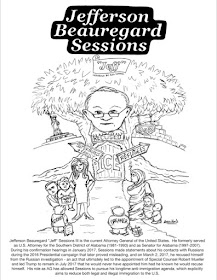 Among his other dubious distinctions, Sessions was the first Senator to support Trump as the Republican candidate for President, and served as the chair of Trump's national security committee during the campaign.

He was promptly rewarded for his service by being nominated for Attorney General on November 18, 2016.  In his January 2017 confirmation hearings, Sessions initially denied contact with any Russians, and under questioning by then-Sen. Al Franken, reacted more like a first-year law student in front of Prof. Kingsfield, rather than the septuagenarian seasoned prosecutor he is.  Asked a different question, he volunteered that "I did not have communications with the Russians," and he followed up with a similar answer to written questions.  He was confirmed by a Senate vote of 52-47 on February 8, 2017, and assumed the office the next day.

On March 1, 2017, the story broke that he had spoken with Russian Ambassador Sergei Kislyak at the Republican National Convention n the summer of 2016, and met with him in his office September 8, 2016.  Sessions was of course not the only figure in Trump's orbit who was entangled with the Russians.  With Trump's firing of Comey, the need for a Special Counsel became increasingly clear.

Notwithstanding Sessions' attempt to finesse his prior answer to mean - he now claimed - he had not spoken with any Russians about the Trump campaign, amidst calls for his resignation for perjuring himself before the Senate, he instead recused himself from the Russia investigation on March 2, 2017.  Thus, while under ordinary circumstances, it would be the Attorney General who appoints a Special Counsel, under 28 C.F.R. Sec. 600.1,  that was not possible with Sessions recused.

Rod Rosenstein, who had been nominated by Trump as Deputy AG on January 31, 2017, was confirmed on April 25, 2017; Rosenstein was sworn in the next day.  The regulations explicitly empower the Acting Attorney General to appoint a Special Counsel in that situation, and on May 17, 2017, Rosenstein, in his capacity as Acting AG, appointed Robert Mueller.

Unlike Rep. Devin Nunes (R-CA),  Sessions appears to have taken his recusal from the Russia investigation seriously.  Perhaps that is because it gave him more time to turn his attention full time to advancing the reactionary social and judicial agenda he has pursued for his entire career, especially when it comes to immigration.  From the very beginning of his tenure, Sessions has sought to step up DOJ's role in all immigration-related issues.

As Vox details here, Sessions has opposed immigration reform in the Senate; espoused ideas about who deserves to be admitted to the U.S. far outside even the Republican mainstream; endeavored to use ICE and the immigration court system itself far more aggressively and punitively towards undocumented persons and would-be immigrants; and undermined policies and procedures protective of those seeking asylum in the U.S.  Sessions (unsurprisingly) opposes DACA, has targeted "sanctuary cities" (especially in California); and, most recently, endorsed a policy of prosecuting illegal entry even by refugees with children, who are then separated from their parents, triggering condemnation by human rights groups and a suit from the ACLU.

And his anti-immigrant policies are just one facet of Sessions' reactionary politics.  He opposes same-sex marriage and the repeal of "Don't Ask, Don't Tell."  In his first month on the job, on February 22, 2017, Sessions rescinded the Obama Administration's Title IX guidance that protected the rights of trans students.  In October, the DOJ rejected the EEOC position that Title VII protects trans workers from employment discrimination.  And of course, no discussion of Sessions would be complete without including his reefer madness, which has included supporting the death penalty as a mandatory minimum sentence for second drug trafficking convictions, including for selling marijuana.  Sessions - who, as one would expect, supports "state's rights" only when that is a euphemism for legalized racism and homophobia - also believes the federal government should be able to prosecute providers of medical marijuana even in states in which that is legal.

Don't be fooled by his resemblance to the E.L. Fudge cookie used to hilarious effect by Stephen Colbert as a Sessions stand-in.  There's no sweet fudgy center to Jeff Sessions: it's racism and xenophobia all the way through.


(Art by Andrea McHale, a special-education teacher in New York City; lettering by Alex Mannos, a graphic artist in Sacramento, California.  The coloring page is subject to a Creative Commons license as below.)